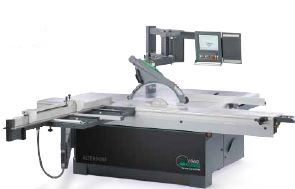 Due to their design, sliding table saws are among the machine types with a high risk of injury. As a consequence, various manufacturers have taken on the development of a safety assistance system. But is there a system that reliably prevents injuries completely? The Fraunhofer Institute provides answers.

Up to 120 reportable accidents involving sliding table saws occur in Germany every month. The associated costs for lost work time and medical treatment are immense. An effective safety assistance system would bring important benefits to craft businesses as well as benefits to society as a whole. The Fraunhofer Institute for Manufacturing Engineering and Automation IPA has taken a close look at safety assistance systems from various manufacturers - including the Altendorf Group's HAND GUARD system, which was recently certified by the German Employers' Liability Insurance Association for Wood and Metal.

The Fraunhofer Institute's study is based on a comparison of capacitive and camera-based safety assistance systems. With both mechanisms, a hazardous situation is first detected using a suitable sensor system in order to subsequently remove the saw blade in the shortest possible time and thus prevent injury to the hand. In the comparative tests, typical working speeds from practice were examined (0.2m/s = slow working speed up to 2.0m/s = very fast working speed). Since most accidents with serious injuries occur during fast hand movements in everyday work, special attention was paid to this. The capacitive system is based on the recognition of human tissue. If a hazardous situation is detected, the system triggers the safety function. However, due to its short sensor range and the associated triggering threshold located only a few millimeters in front of the saw blade, it only offers protection against serious injuries at slow working speeds.

The camera-based system used in HAND GUARD, on the other hand, monitors a wide area around the saw blade. As soon as the camera system detects hands entering this space, the saw blade is lowered. This prevents fingers and hands from coming into contact with the source of injury in the first place. Even at speeds of 2m per second, the system triggers in time and prevents injuries even in this case. "Our analysis of different safety assistance systems on sliding table saws comes to the conclusion that only camera-based systems reliably protect the worker's hand from injury," says Dr. Birenbaum, Group Manager Manufacturing Systems, Fraunhofer Institute for Manufacturing Engineering and Automation IPA. Peter Schwenk, CEO of the Altendorf Group, a pioneer in the field of sliding table saws, is particularly pleased to hear this: "We are the world's only supplier of sliding table saws to offer an AI and camera-based safety assistance system on series machines. With the successful certification by the German Employers' Liability Insurance Association for Wood and Metal, we are also setting the future standard for safety on sliding table saws."

About the Altendorf Group

The Altendorf Group is the world market leader for the manufacture of premium sliding table saws and is one of the hidden champions of the German SME sector. The company was founded in 1906 and has a strong brand recognition worldwide. Its most successful product is the F 45 sliding table saw, also known as "The Altendorf". It is internationally synonymous with the sliding table saw product category. The latest innovation is HAND GUARD, a globally unique early detection system with two cameras that protects

man, machine and material. Since 2018, the Hebrock company with its high-quality Hebrock edgebanders has been part of the Altendorf Group. With subsidiaries in Australia, China, India and the USA, it employs more than 360 people worldwide.